Total support, and I'm surprised this hasn't been suggested before. I can't tell you how many times I've seen studios get raided, and over half the managers/curators get deleted before action is taken. This would be an incredible addition. If this doesn't get added, one thing I like to do is invite my alt to the studio, and if my main account gets deleted, I can still curate on the alt, because you can't delete studio invites. Anyway, back to the point. Yes, this would be awesome. Anyway, could you update OP to include a history menu, where you could add back people that were deleted at a certain time. You don't want to add the raider back

however some people in more professional studios like TFH or the AAA (just an example) might not be happy with it.

If you're mentioning The Forum Helpers, I'm one of them and I wouldn't mind this feature, I think it's fine. I'm not sure why we as a group would be opposed to the idea.

This reminds me of an incident that happened with a collaboration studio I knew about a while back when someone removed everyone and said that the collaboration was over. The owner(s) of the studio ended up making a completely new studio, which was frustrating for them. I can see how this feature would help out with incidents like these.

semi-support. people in the RPing community, like my buddy redwolfowo, might be happy to try and restore bios and RPers in her studios. however some people in more professional studios like TFH or the AAA (just an example) might not be happy with it.

Support! This could help restore raided studios. I would like one thing to be amended though:
Where it says “x restored x project(s) removed by x” I think “removed by x” should be removed from the sentence because that's naming and shaming. It already says “x removed project x” anyway.

Thanks for the support! Good point! I'll work on re-doing the example so that it no longer includes that

Support, this is similar to an idea I had

Thanks for the support!

No support. This wouldn’t be necessary if people were careful about who they added. Scratch Team resources should be focused on other areas.

Will the Restore Projects button restore projects from a curator who purposely removed it?

Yes. If someone comes and removes a bunch of projects from your studio on purpose that weren't supposed to be removed, instead of adding each one back one at a time, you can just add them all back at once

I Semi-Support for the same reason as @YeetoBurro1. That, and I simply don't feel this is necessary, because re-adding projects isn't that hard. But I can see how this would still be very useful for people who curate studios.

Support. It would be useful for restoring raided studios.

Thanks for the support

Semi-Support. While this would be an AMAZING way to recover a studio raid, it could be used to do studio raids. Sometimes someone will add a bunch of unrelevant projects, and so you have to delete them. Then they could just click that button.

If someone adds a bunch of unrelated projects though, another manager should probably remove them (or if they are a curator, they won't have the ability to re-add them.) Also, it's a lot easier to remove a bunch of curators or projects then it is to add them back. You could easily remove several unrelated projects from a studio withing a few seconds to a couple minutes, but adding them back takes way longer.
124: Restoring Curators and Projects at 10:24:46 PM 1/9/20204383223

Note: By curators I mean curators and managers.

My suggestion is to add two buttons on the activity tab which could be used by managers. One says “Restore curators”, and the other says “Restore projects”. Here's what this could look like: 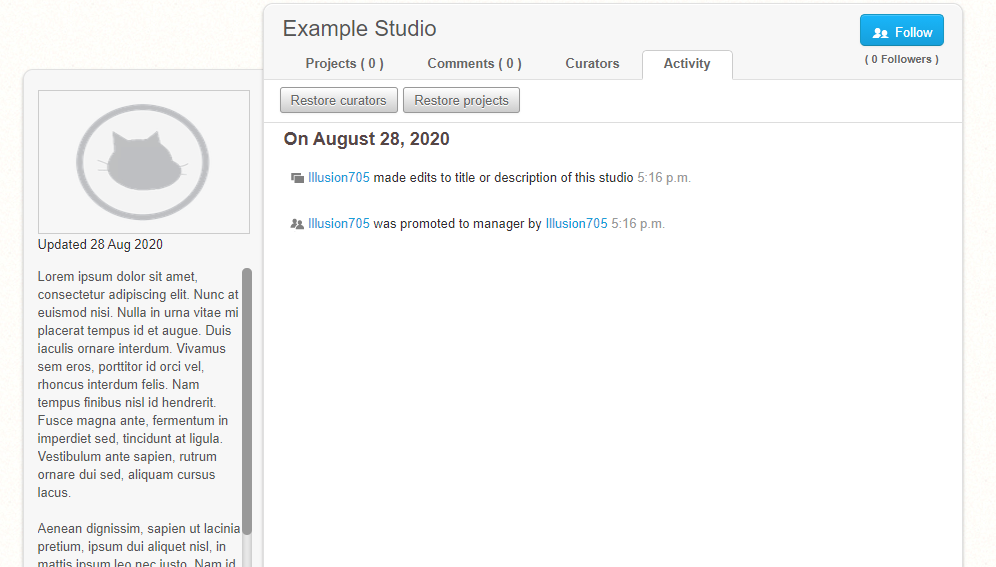 Restore Projects: This button would work exactly like the “Restore curators” button except it would add projects back instead of curators.

Let me know what you think of this idea and how it can be improved. Thanks

Supporters:
username why
@Illusion705 {for the reasons above}

None Supporters:
username why
None
122: "voted by scratchers" section on the front page at 12:22:57 AM 1/9/20204380560
Sorry, but no support. This sounds a lot like the top loved section, and it wouldn't be fair because some projects would probably always have the most votes causing the section to almost never change. For example, Paper Minecraft has been the most viewed project for a long time, so if their was a “Most Viewed” section that had the projects with the most views, Paper Minecraft would always be on it.
121: Add button to demote managers at 7:15:13 PM 29/8/20204374028

Support and I agree only the owner should be able to demote because on Whatsapp everyone was admin on a groupchat someone then demoted everyone which was really annoying. Imagine a studio has lots of managers who were chosen based off certain criteria someone then gets premoted and decides to remove all the managers. It also helps studios which have specific criteria to be managerand if someone no longer meets this they could easily be demoted

I think it would be better to just let all managers demote people so that if the owner is inactive people can still easily be demoted. When you think about it, managers already have the ability to remove other managers which is probably worse than demoting all of the managers, so I think letting any manager demote other managers wouldn't cause any harm.
120: Pen should be vector, or something less pixelated. at 2:41:50 AM 28/8/20204368740
Support! This would make stamping sprites a lot nicer!
«‹12345›» 7